A Night of Tears and Inspiration02 February 2013Next

A Personal Note from Mick Richards

Years in the making, Building a Difference debuted the world premiere of The Goodall Family Story at the Florida Theatre in Jacksonville, FL on January 19th, 2013. The response was overwhelming and better than any of us could have imagined. Tears, hugs, emotion, unity, and love filled the theater unlike anything I had ever experienced at such a venue.

So instead of writing a standard news release about the event, I wanted to take a moment to share my perspective of how important I believe The Goodall Family Story really is. Telling this story was a massive undertaking to say the least. The heart of this project comes down to basically one thing. While Kenny and Kollin Goodall were still with us, I made a promise to both of them that I would share their stories of extraordinary faith that would encourage others amidst the struggles of ALS and leukemia in a documentary. Their wish was that their experiences might help other people see clarity and purpose that lies underneath suffering. No matter how long it was going to take, I was determined to keep that promise. 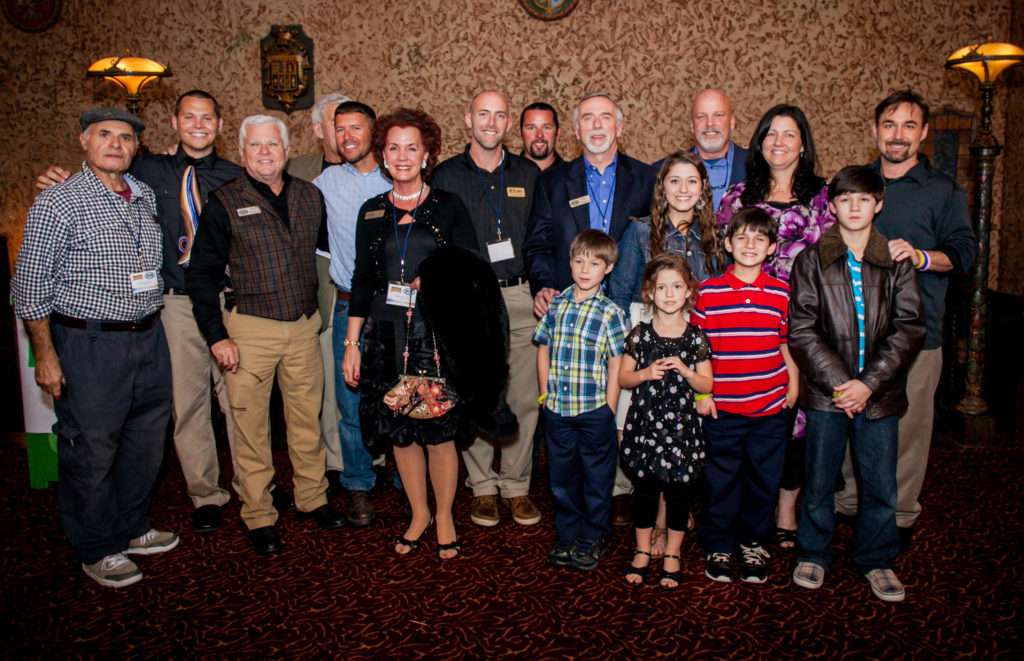 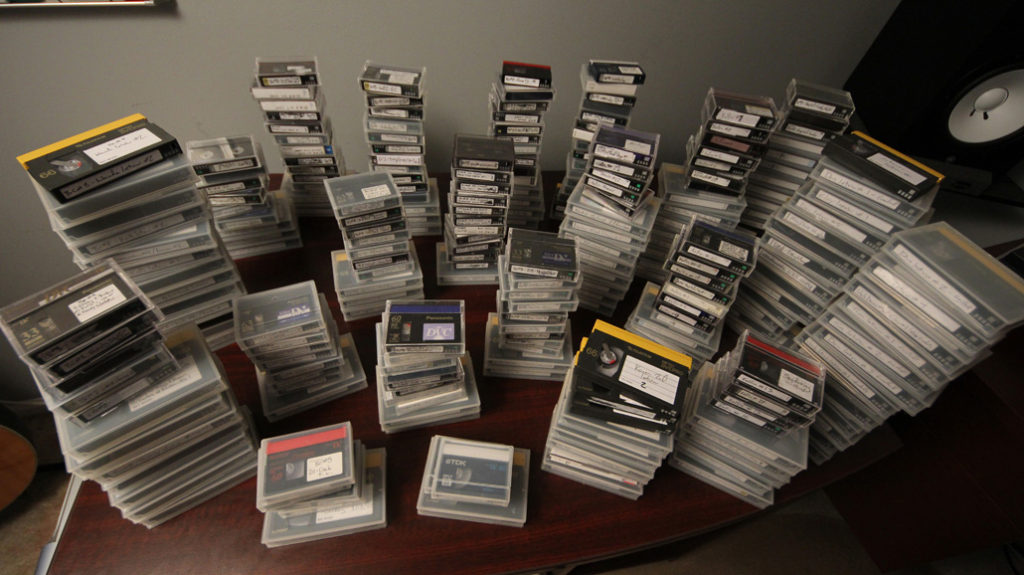 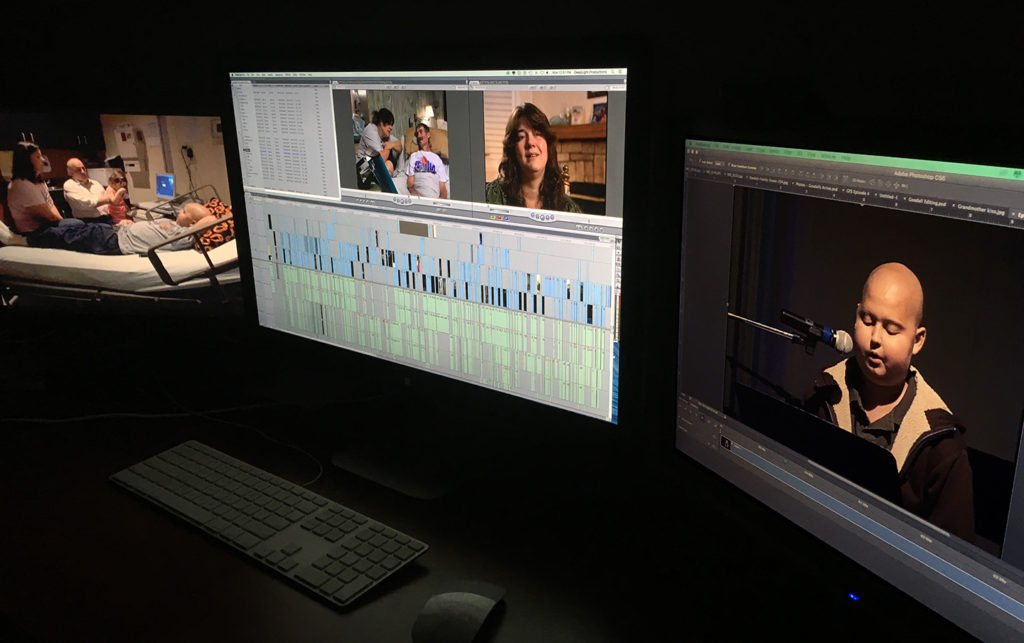 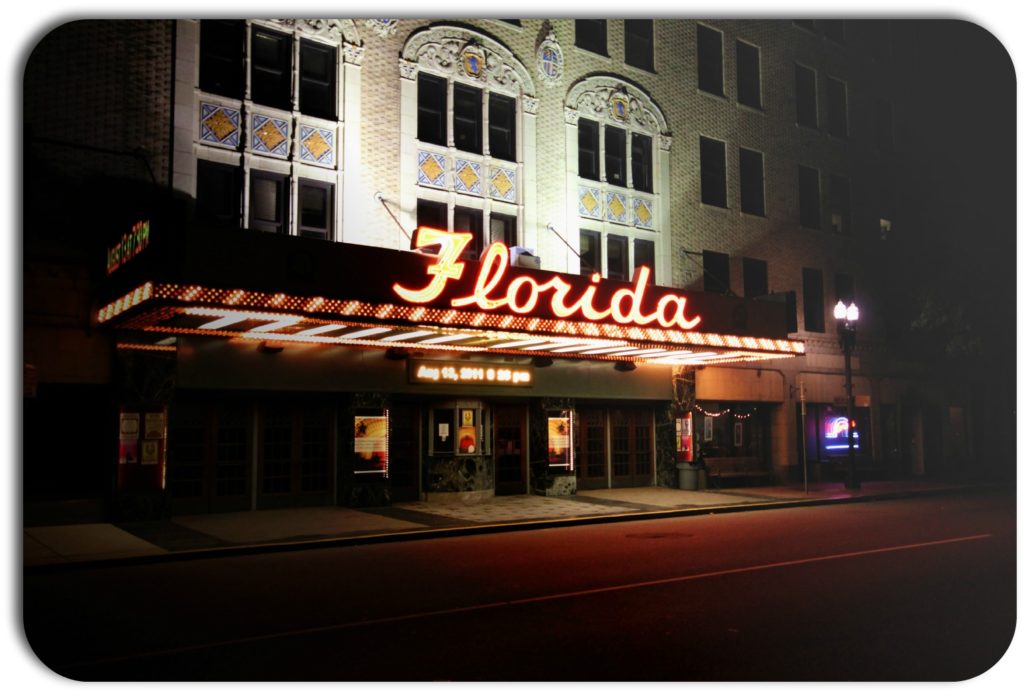 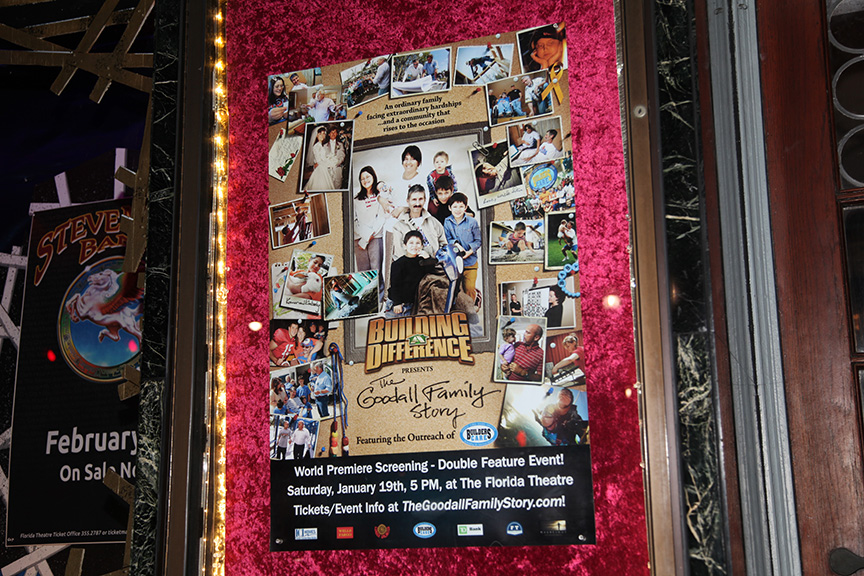 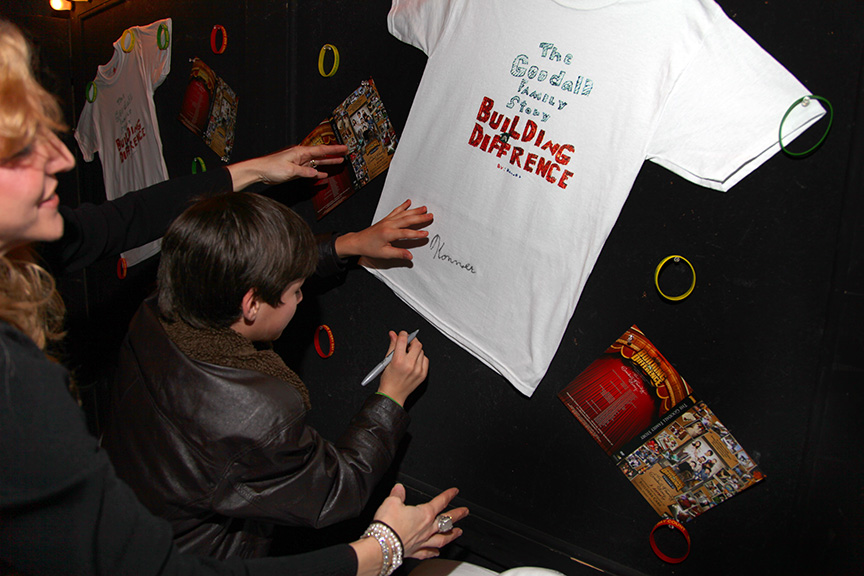 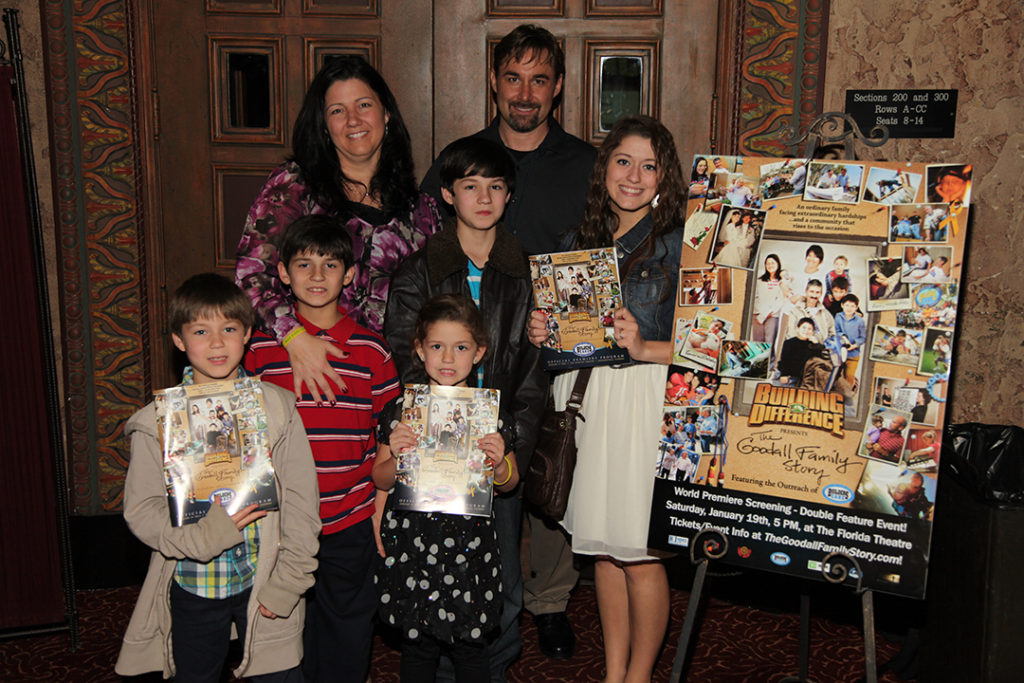 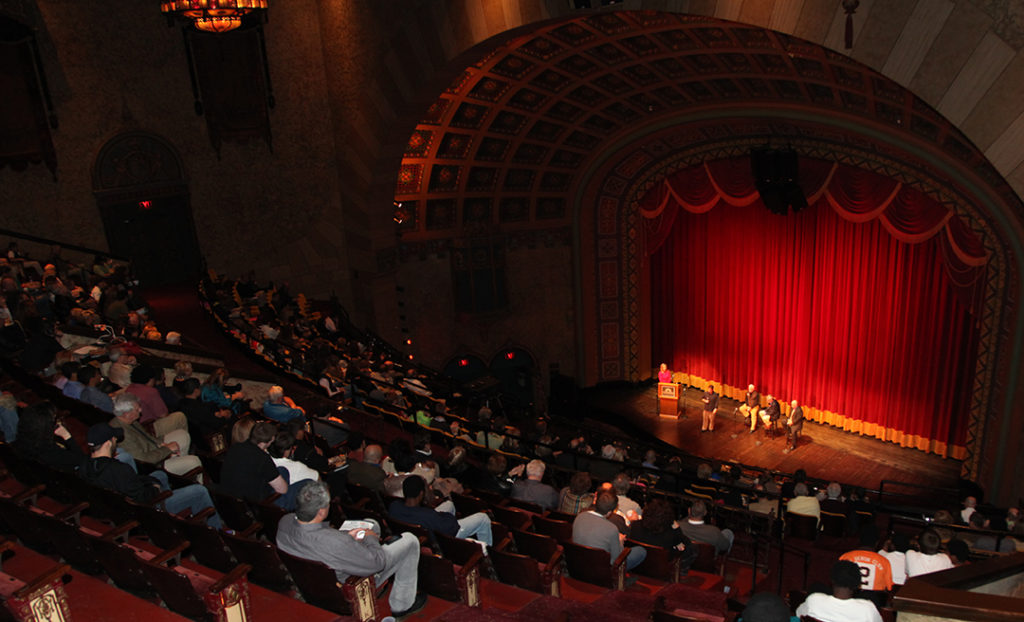 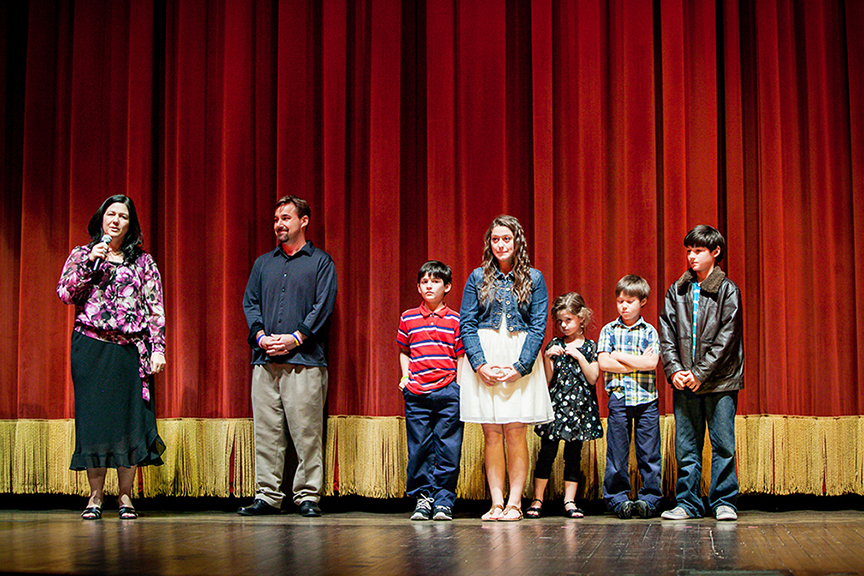 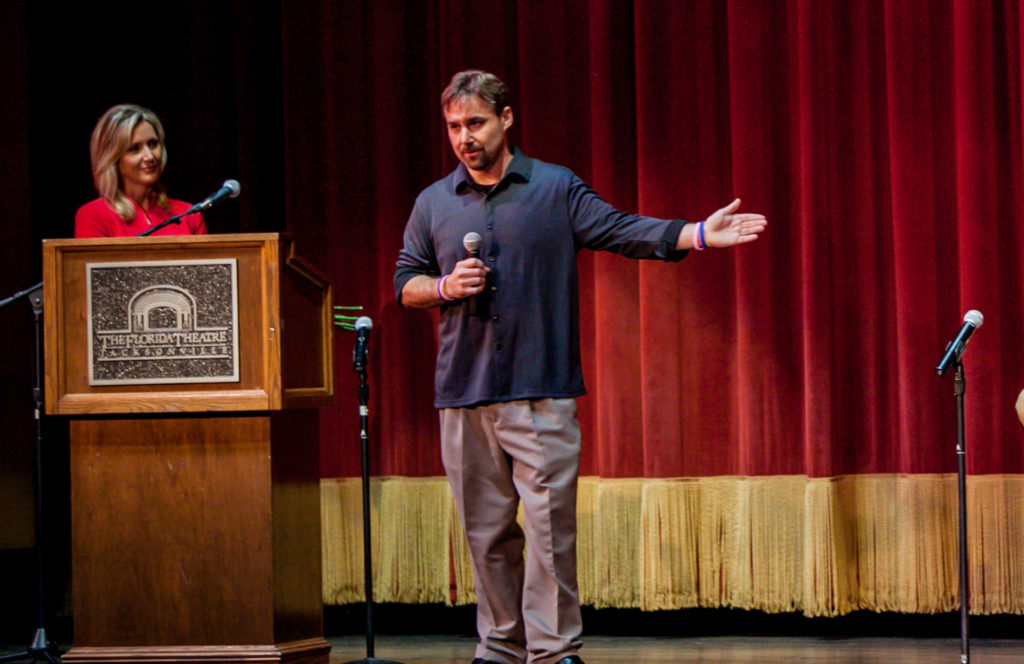 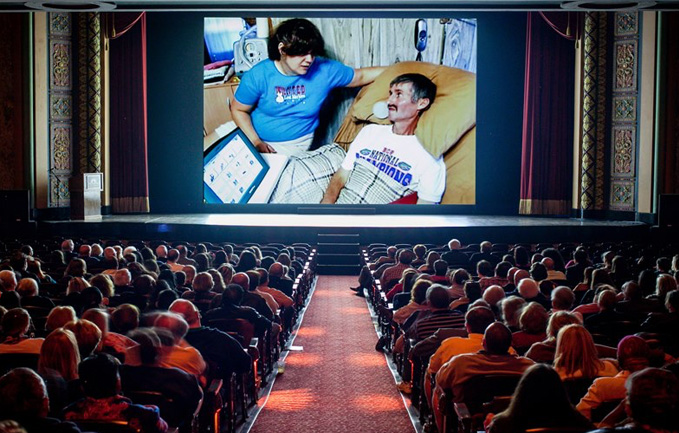 Honestly, the actual size of the project hadn’t been fully realized until I entered the post-production stage after the years of shooting were finally complete. When I sat down to begin the editing process, I opened a box and sorted through tapes (we were still shooting on tape before HD fully took over when the early story with Kenny had begun) with more than three hundred hours of raw footage shot throughout the years of Kenny’s illness, Builders Care’s home makeover, and Kollin’s final days. Add to that about a hundred hours of unedited family home videos, thousands of photos, and a large collection of cell phone videos the family had accumulated. Then came seemingly endless hours of on-camera interviews that had to be transcribed from family members, church members, friends, doctors, builders, and trade partners who had helped them along the way for a grand total of about 500 hours of raw footage.

I collected everything I could to go as deep as possible to find whatever hidden stories were waiting to be discovered. I laid all the material out like pieces of an enormous puzzle with absolutely no idea what the final picture was supposed to become. Then I closed the door to my home studio and withdrew from everyone and everything.

For twelve months I knew nothing but this family; the struggles, the pain, the sorrows, the heartache, and the loss…yet at the same time; the love, compassion, strength, faith, and the amazing beauty that surrounded it all.

I took on the persona of Kenny and tried to experience within myself how hard it must have been for him to lose the ability to walk, move, and eventually even communicate, while the family he loved had to watch his health decline all the way to his very last breath. I needed to become a young man named Kollin who had to come to terms with his dreams of a long, promising future shatter as the pain of leukemia kept surfacing over and over. I emotionally bore the exhaustion of a loving wife and mother who sacrificed everything to become the fulltime caretaker of her dying husband, of her firstborn losing his battle, and of the five other children trying to cope with what was going to effect them deeply for the rest of their lives.

Yet at the same time, I was being taken on an incredible spiritual journey and discovered a hidden beauty so indescribable that I just had to leave it to the viewers to experience it for themselves. Through it all, I have been inexpressibly humbled by what God has accomplished within my own heart, and I can say without hesitation that the very first life that was changed by God’s hand from this documentary was my own.

I am eternally grateful to Kenny, Kollin, and Karen for the priceless gift of personal transformation that resulted from their astonishing testimony. After twelve intense months of solitude, the final portrait of this family’s story was complete. The result was a documentary totaling four and a half hours in length that will broadcast worldwide thorughout thirteen episodes as Building a Difference: Volume 2 – The Goodall Family Story.

To grasp the weight of this production in its fullness it really needed to be seen in one sitting, and the Florida Theatre was the perfect venue for such a premiere. Most people thought I was crazy if I actually believed anyone was going to sit through a four-and-a-half-hour documentary, with an intermission and food, for a potentially six-hour event. In fact, there were some that were quite upset with me because of it to say the very least. But I also understood that they hadn’t seen what I had seen, and Builders Care graciously went out on a limb to organize a doubled-sized event for a production that they hadn’t even laid their eyes on yet. For that, I am forever grateful.

Under the dedication and leadership of event coordinator Dianne Rigby, Builders Care and its board members did an outstanding job of helping promote The Goodall Family Story, receiving overwhelming support from the building, medical, corporate, church, and Jacksonville community at large.

NIGHT OF THE PREMIERE

January 19th had finally arrived, and the Florida Theatre was filling up fast. The Goodall family arrived with jitters and butterflies not knowing what to expect, and tears were already flowing. It was a spectacular reunion among so many friends and loved ones. Konner Goodall was already being asked to autograph the Building a Difference shirts he designed which we had silkscreened for the event. People of all ages were wearing wristbands with the inscription “Kenny and Kollin – Make Every Day Count.”

The show began, and I had the honor of sitting with the family as they watched their story begin to unfold on the big screen. There was laughter, wonder, and tears. One could hear weeping throughout the theater in during the heavier scenes. When Part One: Kenny’s Story ended and the lights went up, Karen and her five remaining children were brought up to the stage amidst a long, loud standing ovation.

Karen wiped her eyes, took a deep breath, and began to speak.

“I can’t begin to thank Builders Care and ICI Homes enough for what they did for Kenny and our family. What we experienced during this build was one of the most amazing times of my life. It was that revival in my heart that made me a stronger person. It made me realize all the things that God does for us on a daily basis. It brought revival in our church and new friends who we now call family.

“I wouldn’t wish this tragedy on anybody, but I thank my Lord and Savior that he trusted me enough to handle it not once, but twice. I miss Kenny, and I certainly miss Kollin, but I’m very thankful for what my family and I have gone through because it’s made us all stronger.

“Mick Richards, you have an amazing talent, and for not knowing us you did an excellent job with portraying our family and what we’re about. I thank you so much for sticking with us and following through with what you promised Kenny and what you promised Kollin. This is a treasure. There is no way I could have ever done what you did for my children. This is a gift and a treasure that we will cherish forever.”
Intermission had started, and I thought for sure we were going to quickly lose half the audience because of the length of Part One.  But instead, everyone was walking around embracing and hugging one another. Faces glowing and with tears of joy, all were sharing about how deeply moved they were and how they couldn’t believe what they had just experienced. It was absolutely beautiful to watch!

After a brief dinner break, just about everyone returned to their seats anxiously awaiting the second half.  The lights went down and Part Two: Kollin’s Story began. Everyone in the theatre spent the next few hours on an intense, emotional roller coaster ride and spiritual journey through Kenny and Kollin’s final days. It was an indescribable captivation that gripped the audience from beginning to end.

When the last scene faded to black there was heavy silence. David Beecher, Associate Pastor of Mill Creek Baptist Church, took the stage and closed the evening out with poignant words that struck right to the soul. Then the entire audience stood up and gave an extremely emotional outpouring of applause for The Goodall Family Story.

Unlike the intermission, this time people seemed to have no words to describe the emotions inside them. They just weren’t able to get anything out.

And then a young girl approached me. Wiping her eyes, she said she needed to say something. Not understanding why at the time, she felt compelled at the last minute to attend the event. But now that it was over, the reason became clear. She went on to explain that before the event she was contemplating suicide, but after watching Kollin’s Story, God had now given her a reason to live. She embraced me with tears and said “thank you.”

That is just one of the so many reasons why I believe The Goodall Family Story is so important. Those of us who worked hard to get this story told stand firm in agreement that everyone needs to watch this presentation.

It is the desire of Building a Difference to do everything we can to share this with the world. So we are sending out the invitation. If you will have us, we would love to come to your city, your town, your church or venue, and show The Goodall Family Story to everyone you can bring.  If you feel this will minister to your congregation, challenge your community association, or inspire your group or charity, we will be there to put on an event. Please contact us anytime about how to make this possible. We feel strongly that lives will be touched, changed, and even as you just read, saved as a result. Please prayerfully consider partnering with us in sharing this story with as many people as we can.

God’s blessings to you all and thank you for taking the time to hear from my heart,