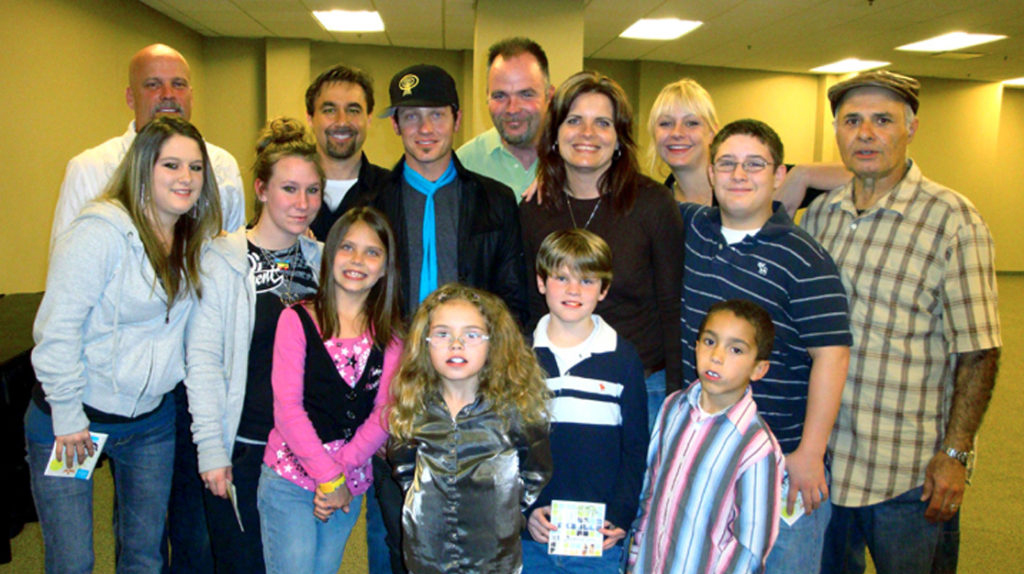 Grammy Award winner TobyMac took time out from a concert tour that swept through Jacksonville, Florida recently, to spend time with Building a Difference and the Page-Bailie family. Melissa Page-Bailie is a foster mother with a ministry of helping children in need, including adopting some of them. Their story is featured in a 3-part series on Building a Difference, a faith-based home makeover program which airs worldwide on the Trinity Broadcasting Network (TBN). When TobyMac brought his Winter Jam 09 Tour Spectacular to Jacksonville, he invited Melisa and her adoptive children to the show.

TobyMac met the family for the first time during a special and private, backstage visit at Veterans’ Memorial Center. He was truly impressed by Melisa’s ministry and what she’s done for hundreds of children in need over the years as a foster mother. “Wow!”, he said in an on camera interview, “two hundred kids….that’s such awesome work you do! Did you feel like God wanted you to just open your house up and love on people,” he asked?

Melisa told him everything that’s happened in her life has lead to this point. “I felt this calling all my life and I really wanted to adopt twelve. I’m still working on it,” said Melisa, surrounded by seven of her nine children. “Twelve?? Man, I’m going crazy with five!” joked Toby Mac.

“They doubled the size of the house? So you guys got the ‘phat’ hook-up! That’s unbelievable. When you walked in were you all trippin’ or what?” asked TobyMac. The kids told him that they were all crying tears of joy when they saw the house for the first time. “Wow, that’s so sweet. I wish I could have been there!”

Seven-year-old Gabe noticed what looked to be a tattoo of a ring on TobyMac’s wedding ring finger. “Is that real?” asked Gabe. “Yes that’s for real, and my wife has one too. We both got them on our 9th anniversary and we have now been married 15 years and we have five beautiful kids.” Gabe said he wanted one, and Toby drew rings on the kids fingers, autographed concert programs and even signed David’s prosthetic leg.

TobyMac has been ministering to kids with his music since he was originally in DC Talk and now as a solo artist. In February at the 51st Annual GRAMMY® Awards, The Best Rock Or Rap Gospel Album honor went to TobyMac. This marks his fifth consecutive GRAMMY® nomination and his first win as a solo act for his newest project, ALIVE & TRANSPORTED, his CD+DVD combo that released last summer.

He was especially touched with what Builders Care had done in order to help Melisa continue her ministry to children. He is also excited their story will inspire people all around the world on Building A Difference, which began airing in February 2009. “Chris, thank you for what you guys are doing. You are truly serving the Kingdom and building a difference. It’s the bomb-diggy!” cheered Toby Mac.

Building A Difference thanks TobyMac and his incredible team for not only encouraging the Page-Bailie kids, but for ministering into the lives of kids all around the world. TobyMac… keep building a difference brother!