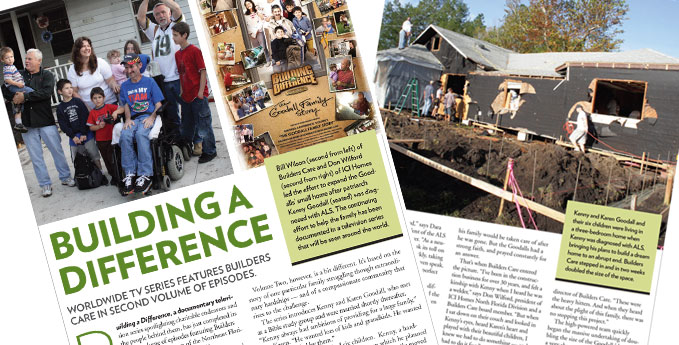 This is a GREAT ARTICLE in The Florida-HomeBuyer about Building a Difference and the Goodall Family Story. Open the PDF and get an inside look into the TV series and family!

Open the PDF and READ HERE!

Building a Difference, a documentary television series spotlighting charitable endea-vors and the people behind them, has just completed its second volume of episodes featuring Builders Care, the nonprofit arm of the Northeast Florida Builders Association (NEFBA).

Building a Difference Volume Two: The Goodall Family Story will be shown at a special edition premiere event scheduled for early fall 2012 at a location yet to be determined. The eight-part, half-hour series, which is broadcast over more than 20 networks worldwide, will make its television debut shortly thereafter.

“Builders Care is no stranger to the Building a Difference series,” says Mick Richards, owner of DeepLight Television and executive producer/director. “With the 16 episodes of Volume One, we’ve been able to share many inspiring stories of how Builders Care has helped people in its own community.”

Volume Two, however, is a bit different. It’s based on the story of one particular family struggling through extraordinary hardships – and of a compassionate community that rises to the challenge.

The series introduces Kenny and Karen Goodall, who met at a Bible study group and were married shortly thereafter. “Kenny always had ambitions of providing for a large family,” says Karen. “He wanted lots of kids and grandkids. He wanted to be surrounded by them.”

The couple eventually had six children.  Kenny, a hardworking welder, bought a 10-acre tract on which he planned to build a dream home. In the meantime, the family moved into a small, three-bedroom home where they planned to stay temporarily.

However, those plans came to an abrupt halt when Kenny was diagnosed with ALS, otherwise known as Lou Gehrig’s disease. “ALS pa-tients usually have two to three years of life after being diagnosed,” says Dara Alexander, former president of the ALS Association Florida Chapter. “As a neuromuscular disease, ALS took its toll on Kenny and it progressed quickly, taking away his ability to move and even speak. His mind, however, was still in perfect condition.”

Karen was having an extremely difficult time caring for Kenny ar-ound the clock while trying to keep a half-dozen broken-hearted children emotionally strong as they watched their father’s illness progress, weakening him to the point that he was confined to a living-room chair. Ad-ding to the hardship, the large family was packed into a circa-1940s home that was too small for eight people.

With his communication abilities decimated, Kenny worried about how his family would be taken care of after he was gone. But the Goodalls had a strong faith, and prayed constantly for an answer.

That’s when Builders Care entered the picture. “I’ve been in the construction business for over 30 years, and felt a kinship with Kenny when I heard he was a welder,” says Don Wilford, president of ICI Homes North Florida Division and a Builders Care board member. “But when I sat down on their couch and looked in Kenny’s eyes, heard Karen’s heart and played with their beautiful children, I knew we had to do something – and we had to do it fast.”

With ICI as its partner, Builders Care quickly rallied the industry’s premier trade partners. “It was important for us to get everyone in the same room at the same time,” says Chris Simons, executive director of Builders Care. “These were the heavy hitters. And when they heard about the plight of this family, there was no stopping this project.”

The high-powered team quickly began the massive undertaking of doubling the size of the Goodalls’ home in a very short amount of time.

“To hear that Builders Care was going to add on to our home to make it more accommodating for our large family, as well as for Kenny’s needs while he was still here with us, was an absolute blessing from God,” says Karen. “Not in my wildest dreams could I have ever foreseen something like this ever happening.”

Bill Wilson, founder of Builders Care, wanted to go even farther. “Normally on a fast and furious project like this, we ask the family to leave and don’t bring them back until the job is finished,” he says. “But on this one, we wanted Kenny to be out there with us so that he and his family could be a part of the event at every stage.  Kenny couldn’t speak, but we knew he’d be lit up the whole time with his thoughts and emotions – and that in itself was going to be a huge gift for him.”

For two solid weeks, cameras rolled as the Builders Care team worked alongside ICI employees, tradespeople, church members, youth groups, family friends and eagar volunteers from all over the country.

“The Bible says that the two greatest commandments are to love God and love people,” says Simons. “During those two weeks, I believe we were given the opportunity to do both. And by giving the Goodalls a new home, Kenny was able to have peace knowing his family would be cared for. And he was able to spend his final days with them in a safe, comfortable new environment.”

Then, almost unbelievably, the family was struck with another tragedy. Kollin, 14 and the oldest of the Goodall children, had been feeling unusually tired during the two-week project. Three days after the new home was complete, he was diagnosed with leukemia.

“It broke my heart that Karen had to go through this while still taking care of Kenny,” says Judith Sisler-Johnston, president of Sisler Johnston Interior Design and one of the lead designers for the Goodall pro-ject. “But we were determined to pray that God would sustain her and help her to face each day strong for her family.”

Soon the ALS had its course and Kenny died peacefully in a room surrounded by friends and family. “The funeral was emotional for everyone there, but we all knew where Kenny had gone. He’d gone home to be with the Lord,” says David Beecher, associate pastor of Mill Creek Baptist Church and longtime friend.

Kollin continued to struggle with leukemia and eventually needed a bone marrow transplant. His younger sister, Kaley, was a match, and a transplant procedure was performed. Initially, doctors had high hopes for a remission – but is wasn’t to be.

“Brother David and I rushed to the hospital,” recalls Karen. “While talking to the doctor, I turned to David and told him that I couldn’t ask the question that needed to be asked. So he turned to the doctor and spoke the words I couldn’t: ‘How long does Kollin have?’ The doctor said about two weeks to a few months at most. I was completely shocked and stunned. Everyone in the room started to cry, except for Kollin, who turned to me, perfectly calm, and said, ‘Mom, its going to be okay. Everything’s going to be okay’. ”

Kollin and Karen asked Building a Difference to continue telling their family’s story through this painful time. During one of Kollin’s final interviews, he said: “If I wasn’t a Christian I would be scared to death. I don’t want to leave everyone be-cause I’m going to miss them so much, but if I’m just going to suffer down here, I’d rather be up there, because up there I’m going to get to be with my dad.”

Richards spent most of his time with the family during the last few months of Kollin’s life. “Documenting the many ways everyone journeyed through Kollin’s final days was one of the hardest things I have ever had to do,” he says.

Richards adds that the result was “the most beautiful story Building a Difference and Builders Care has ever told. It’s a story of an ordinary family facing extraordinary hardships, and how God used his people to help them through it. Underneath the tragedy of suffering, there’s a hidden beauty waiting to be discovered if we allow God to show it to us. And it’s that truth I hope people will find in this story.”